The Facts As I Remember Them

Pueblo Bellaluz along with its gardens, walkways and two Plazas also included an area designated for two swimming pools and a two storey restaurant.

The pools, one a children’s splash pool the other a serious 25m by 15m pool with competition lines, lane hooks and underwater lighting, 3m deep diving area, spring diving board and lined with a polyester plastic finish, water purification, filtration pumping control were housed in a separate underground pump houses.

Initially because Inmogolf S.A. held a 10% stake in the development, two AGM’s were held in London in 1985 and 1986. Inmogolf S.A. claimed that the swimming pool area was theirs and a battle commenced with the newly formed owners committee. Inmogolf S.A. finally conceded the area to the community of Bellaluz. 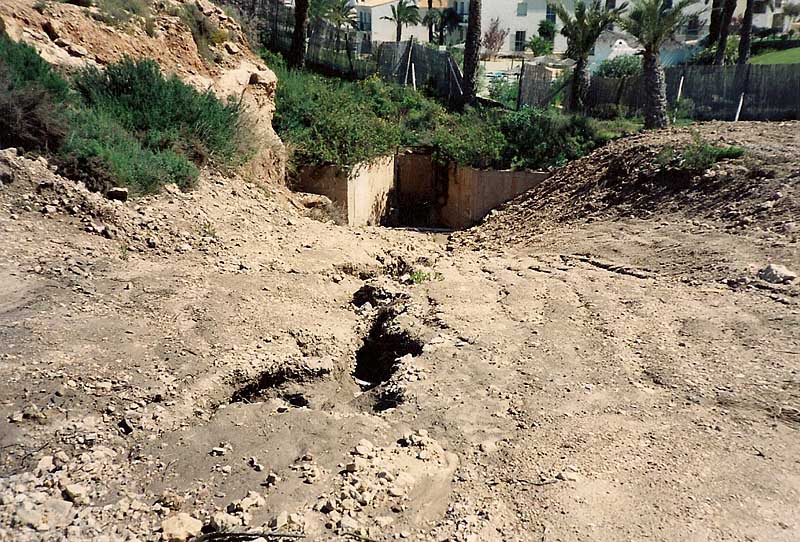 In late 1985 an unprecedented rainstorm caused serious flooding throughout Bellaluz. Basement apartments were flooded to a depth of 2m. The swimming pool area was devastated, with partial destruction of the pool restaurant and serious damage to the swimming pools.

This calamity to the swimming pool area was the direct result of an undersized drainage system. The area had been sited in a watershed long dried out. It had been blocked off and as a precaution a 0.75m diameter drain line installed bypassing the main swimming pool at a suitable depth.

To prevent children gaining access to the pipe inlet, a steel grid partially obstructed this undersized inlet. During the storm, debris was washed down the hillside to the back of the swimming pool area, completely blocking off the drainage system. The watershed quickly filled and cascaded into the swimming pool area filling both pools with rocks and mud, and partially destroying the pool restaurant. 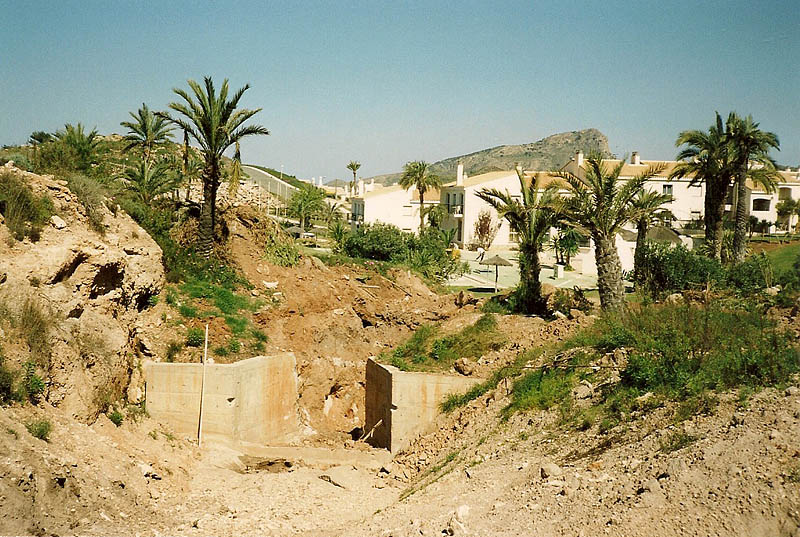 The community were able to prove that the underestimation of the bypass drain was the direct cause and after many months of argument Inmogolf S.A. conceded and paid for the general clean up and the laying of a new concrete drainage system. The new drain line was resized at 1.5m diameter and the swimming pool area was re-commissioned 18 months later.

Inmogolf S.A. also spent many million of pesetas stabilising the forested hillside with water breaks and deep concrete channels to the back of blocks 17 and 18.

Unfortunately due to the severe beating they had had, the swimming pools never really recovered. Continual water loss and maintenance work put a heavy strain on the Bellaluz budget. A decision was taken and passed by the Bellaluz Committee prior to an AGM to completely rebuild the main pool. The cost was in the order of £80,000. It was a brave decision but at the AGM only one dissenter complained and voted against.

A very strict specification was presented to the three swimming pool builders. The highest bid was accepted because the builder was internationally reputed for excellence. 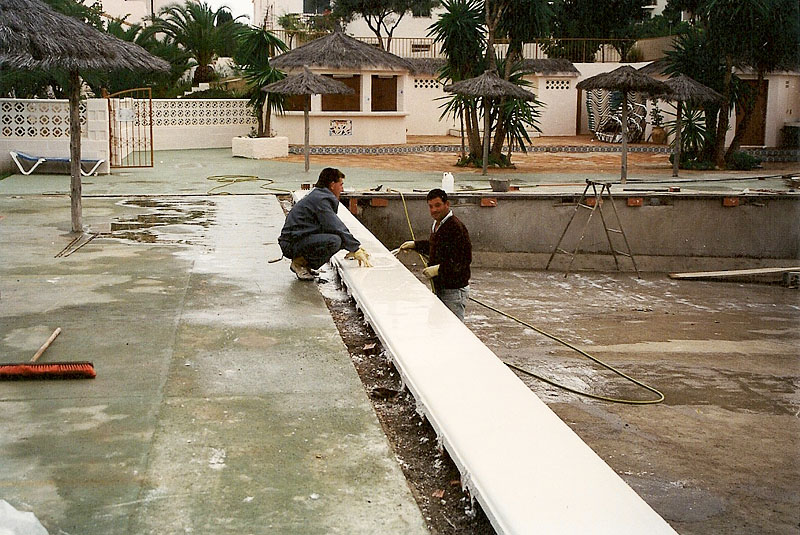 The old pool in its dilapidated condition was left as a containment box. New walls and pool bottom were constructed by decreasing its size and depth at the 3m end. The process of gunniting a heavy steel reinforced cage was adapted. Gunniting is a technique for blasting at high pressure a quality concrete mix at the steel cage ensuring a rigid watertight construction. The completed box was tiled as opposed to plastic with mosaic tiles. It had been reduced in capacity from 750 cubic mtrs to 700 cubic mtrs (700 metric tonnes).

All the main swimming pool infrastructure was replaced, the new circulation system incorporated a facility for solar heating panels to be installed at a later date.

The main swimming pool was guaranteed for 5 years against failure.

The pool contractor lost most of his profit when it was discovered that the ceramic tiled logo, the LMC logo with Bellaluz had been installed facing the wrong way to the specification. This was brought about because all the panels of ceramics were covered with a brown paper protection cover and the mistake only noted when the protection covers were removed.

Over the years since 1997 the main swimming pool has given trouble free service and the swimming pool area is certainly the jewel in the crown of Bellaluz Pueblo.

In the intervening time the whole area surrounding the pools has been tiled with non slip ceramic tiles, a security surround fence installed, the children’s splash pool relined, solar heating panels provide heating for use six weeks either side of the normal swimming period, the remaining part of the original pool restaurant given a good makeover which included new electrics and drainage and fully retiled and poolside showers installed. An up to date water control system for correct pH value retention. Both pump houses for main and splash pools require attention.